Air Brakes in Big Rigs – Everything you need to know! – PART 2 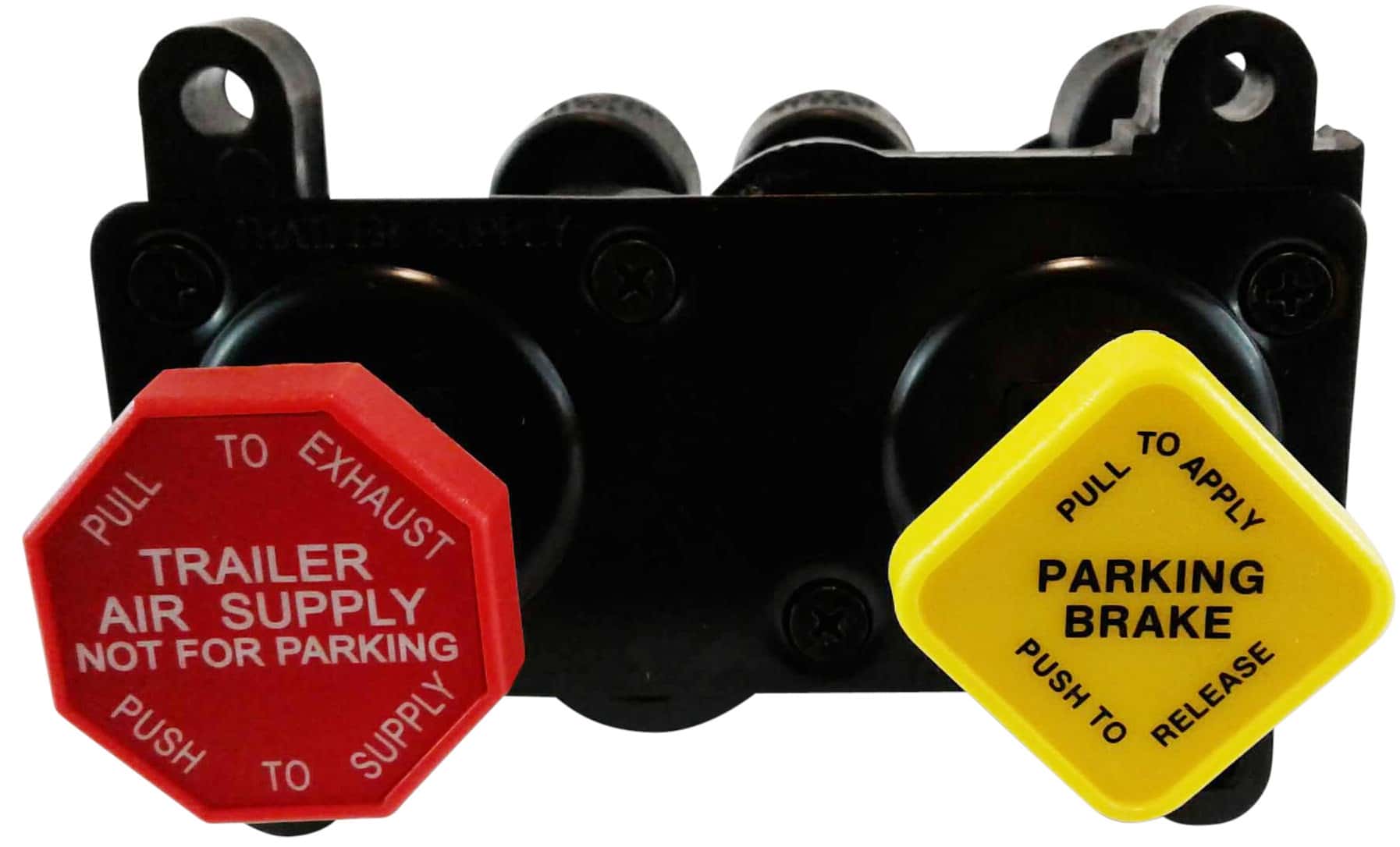 An air supply pressure gauge connected to the air tank is common in all air-braked vehicles. In the event a vehicle has a dual air brake system, a gauge will be present at each half of the system or, sometimes, a single gauge with two needles. These gauges tell you how much pressure is in the air tanks. However, there are instances where dual systems are present, it will be discussed later in the article.

Very common in Big Rigs; an Application pressure gauge shows how much air pressure you are applying to the brakes. However, some vehicles do not have this gauge. It is important to have because when the vehicle is going down steep grades, at this moment increasing brake pressure to hold the same speed would mean the brakes would be fading. Therefore, the need for increased pressure can also be caused by brakes out of adjustment, air leaks, or mechanical problems, hence giving clear indication in this regard.

A warning device, which you can see, must come on when the air supply pressure drops below 60 psi (414 kPa) or one half the compressor governor cut-out pressure on older vehicles. Hence, the low air pressure warning device is required on vehicles with air brakes. In this situation, the warning is usually a red light and also a buzzer may come on. Also, in such an instance another although not common type of warning is the "wig wag." This device propels a mechanical arm into your vision when the pressure in the system descends below 60 psi.

In an automatic wig wag type system the mechanical arm will rise out of your view when the pressure in the system goes above 60 psi. However, in the manual reset type, the arm must be placed in the "out of view" position manually. As a fail-safe measure in a manual reset type system, it will not stay in place until the pressure in the system is above 60 psi.

The switch turns on the brake lights when pressure is applied to the brake pedal. It is so since, the Drivers behind a vehicle must be warned when that vehicle's brakes are being applied. The air brake system does this with an electric switch that works by air pressure.

Front wheel braking is good under all conditions. Tests have shown front wheel skids from braking are not likely even on ice. Hence, Front Brake Limiting valves are used to reduce the chance of the front wheels skidding on slippery surfaces Even though not very common occurrence today a few vehicles made in the past, commonly identified as prior to 1975 have a front brake limiting valve and a control in the cab. This control is usually marked "normal" and "slippery." When you put the control in the slippery position, the limiting valve cuts the normal air pressure to the front brakes by half. On the other hand, they also reduce the stopping power of the vehicle. It is an important point to note:  for divers it is to make sure the control is in the normal position in order to have a normal stopping power.

The extent of braking power of spring brakes depends on the brakes being adjusted. If the brakes are not adjusted neither the regular brakes nor the emergency/parking brakes will work properly.

Most vehicles are fitted with an anti-compound system. Thus keeping the brakes from being impaired by the compounded forces of the spring and the air such as in the instance where the driver were to push on the brake pedal with the parking brakes applied.

In selected vehicles a control handle on the dash board may be used to apply the spring brakes progressively. This is known as the modulating valve. This valve is spring loaded, hence, you have a feel for the braking action. The further you move the control lever the harder the spring brakes come on. They are engineered this way, so you can control the spring brakes even if the service brakes fail. When parking a vehicle with a modulating control valve move the lever as far as it will go and hold it in place with the locking device.

Latest heavy-duty semi trucks use dual air brake systems for added safety. Since a dual air brake system has two separate air brake systems which use a single set of brake controls. Each system has its own air tanks, hoses, lines, etc. The first system is called the primary system and the other is called the secondary system. The primary system normally operates the regular brakes on the rear axle or axles. The secondary system operates the regular brakes on the front axle and possibly one rear axle. Also, both systems supply air to the trailer.

Before driving a vehicle with a dual air system, allow time for the air compressor to build up a minimum of 100 psi (690 kPa) pressure in both the primary and secondary systems. Watch the primary and secondary air pressure gauges. The low air pressure warning light and buzzer should shut off when air pressure in both systems rises to a value set by the manufacturer. This value must be greater than 60 psi or 410 kPa. The warning system devices should come on before the air pressure drops below 60 psi in either system. If one air system is very low on pressure, either the front or the rear brakes will not be operating fully. This means it will take you longer to stop. Bring the vehicle to a safe stop and have the air brake system fixed.

The trailer air supply control on new vehicles is a red 8-sided knob which controls the tractor protection valve. Pushing it in supplies the trailer with air and pulling it out shuts the air off and puts on the trailer emergency brakes. The valve will pop out and close the tractor protection valve when the air pressure drops into the range 20 to 45 psi. Emergency valves on older vehicles may not operate automatically. There may be a lever rather than a knob.

Every combination vehicle has two air lines—the service line and the emergency line. They run between each vehicle; such as tractor to trailer, trailer to dolly, dolly to second trailer.

Glad hands are connector devices used to link the service and emergency air lines from the truck or tractor to the trailer. The couplers have a rubber seal which prevents air from escaping. In order to connect the glad hands, the driver forces the two seals together with the couplers at a 90° angle to each other. As the glad hand attached turn the hose will join and lock the couplers. Keeping the air supply is of paramount importance and in order to keep the air supply clean, some vehicles have "dead end" or dummy couplers to which the hoses may be attached when they are not in use. Hence, preventing water and dirt from getting into the coupler and the air lines. As a proactive measure and to avoid mistakes, metal tags are usually attached to the lines with the words service or emergency stamped on them. In other instances, colors are used. Blue is used for the service lines and red for the emergency lines. If by any chance, the air lines were to cross and the supply air would be sent to the service line instead of going to charge the trailer air tanks. As a result air would not be available to release the trailer parking brakes also known as trailer spring brakes. Therefore, if the spring brakes fail to release when the trailer air supply control is pushed in, the air line connections may be reversed.

It is found that each trailer has one or more air tanks. These tanks are filled by the emergency supply line from the tractor and they provide the air pressure used to operate trailer brakes. The air pressure is sent from the air tanks to the brakes by relay valves. How much pressure the relay valves should send to the trailer brakes are dictated by the pressure in the service line. However, the pressure in the service line is controlled by the brake pedal and the trailer hand brake. It is paramount that oil and water are not allowed to build up in the air tanks. By any means, they do, the brakes may fail and not work. One should keep in mind that each tank has a drain valve on it and without fail must be drained every day. It should be of practice where the drains should be opened manually to check for moisture even If the tanks have automatic drains, which will keep most moisture out.

Fondly referred to as cut-out cocks; the shut-off valves are used in the service and supply air lines at the back of the trailers which is used to tow other trailers. When no other trailer is being towed these valves permit closing of the air lines. Frequent and periodically, drivers must check that all shut-off valves are in the open position except the ones at the back of the last trailer, which must be closed.

In cohesion, all these various parts of the air brake system, fundamentally and at a primitive level, operate in a manner similar to that of a piston in an internal combustion engine would inside its cylinder. Where the air storage tanks are filled with compressed air by the compressor, which is powered by the engine. Where and when the driver steps on the brake pedal, or treadle valve, allowing air from the storage tanks to flow into the cylinder, pushing the piston down the cylinder. This is the service portion of the system. This cylinder is known as the brake chamber. The piston is attached to the push rod, which in turn rotates the slack adjuster. The slack adjuster connects the push rod to another rod, which then rotates. This rod is connected to the S-cam. Even though the S-cam are the most widely used type, there are several types of air brakes, including wedge type brakes. It is the S-cam that turns and pushes the brake shoes against the lining of the drum brake. The air brakes on a semi-trailer are linked to a tractor with two lines. One line is called the supply line or the emergency line. The emergency line provides air pressure to fill the semi-trailer's reservoir tank and the pistons that activate the brakes. The other line is called the service line, which is typically smaller. In normal braking, pressing the brake pedal pressurizes the service line. As a result activating a valve in the trailer which then directs air from the reservoir and the emergency line to the brake cylinders. This in turn, moves the piston that activates the brakes. There after when the pedal is released and let up, the service line pressure is reduced and when the service line pressure drops, this causes the valve in the trailer to block the air supply from the reservoir while letting go the pressure in the brake cylinder and as result the brakes are released. On the other hand, if the pressure in the emergency line reduces, due to the activation of a valve in the cab, the disconnection of the emergency line coupling, or a break in the emergency line, as a result the spring brakes will activate, since there is no more air pressure in the trailer air tank to hold them back. So, the next time you hear that hiss of air brakes from either your truck or the one behind you on the road, you can relax, as now you have a much broader understanding as to how they function and know that they were built with safety in mind.